Raise A Joyful Strain For Our Brother Francis! 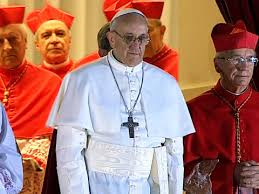 The name of our Holy Father brings great joy to me! The only thing more surprising than the fact they elected him, a Cardinal not spoken of as Papabili even in Catholic media circles, was the choice of his name. It is a name that represents humility, service, and brotherhood among the faithful, from the Pope all the way down to those with the very lowest stature. What a wonderfully rich and precedent shattering name! Praise God!

And I wonder whether he will choose to be installed on the Feast of St. Joseph!? What a blessing that would be for the Church and especially the Italian and Argentinian Churches as St. Joseph is the patron Saint of Italy and most Argentinians are of Italian descent!

What struck me first of all when he came outside onto the balcony was the poise and stillness with which he presented himself to the throngs of faithful. He chose not to gesture joyfully at first as Benedict did (not that this was a bad thing) but remained calm, poised, a joyful rock among a sea of joy. To me he exuded authority, stability, and holiness.

But his humility was amazing as he preferred to request our prayers and blessing before giving his own to the Church! How beautiful and humble! This brought great joy to my heart and the heart of the Church, that he would ask that the Church pray for him first. And only then, after the Faithful had prayed for him and acclaimed him, did the Holy Father put on his magnificent stole in order to pray for us and bless us, symbolizing that the glory of a shepherd is found in his care for his sheep, and in their care for him!

How very beautiful! I cannot wait to see what the Spirit has in store for the Papacy of Holy Father Francis.

Below is a relevant Scripture passage from Sirach 50:17-24. Rejoice!

Then all the people with one accord would quickly fall prostrate to the ground in adoration before the Most High, before the Holy One of Israel. Then hymns would re-echo, and over the throng sweet strains of praise resound. All the people of the land would shout for joy, praying to the Merciful One, As the high priest completed the services at the altar by presenting to God the sacrifice due; then coming down he would raise his hands over all the congregation of Israel. The blessing of the LORD would be upon his lips, the name of the LORD would be his glory. Then again the people would lie prostrate to receive from him the blessing of the Most High. And now, bless the God of all, who has done wondrous things on earth; Who fosters men’s growth from their mother’s womb, and fashions them according to his will!

May he grant you joy of heart and may peace abide among you; May his goodness toward us endure in Israel as long as the heavens are above.

2 Responses to Raise A Joyful Strain For Our Brother Francis!