Explanation of the Immaculate Conception

The following is a letter I wrote in response to a question posed concerning the dogma of the Immaculate Conception. 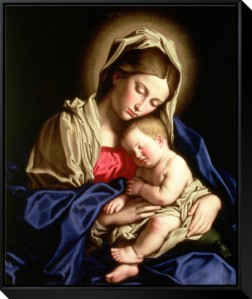 First, the conception of Jesus in the womb of Mary by the power of the Holy Spirit is not referred to by Catholics as the “immaculate conception.” This event is usually referred to as the Annunciation, when the Angel Gabriel appeared to Mary and asked her whether she would receive Jesus into her womb, and be his mother. She said yes or in her far superior words “Behold, I am the handmaid of the Lord, let it be done to me according to your word! (Luke 1:38). At first Mary puzzled over Gabriel’s words wondering how she would conceive a son having not had relations with a man. The Angel assured her that “The Holy Spirit will come upon you, and the power of the Most High will overshadow you. Therefore the child to be born will be called holy, the Son of God.” As we can see the conception of Jesus in the womb of Mary did not proceed according to normal relations between man and wife as Jesus had one biological parent, Mary, and one Divine Parent, God the Father through the Holy Spirit who overshadowed Mary and conceived the Son of God in her womb.

The controversy in the Catholic Church regarding the Immaculate Conception lasted for 1800 plus years until Pope Pius the IX finally settled the matter, defining the dogma as true without doubt and requiring Catholics to believe it as a doctrine of the Faith.

The reason why Mary was conceived without sin is because as fallen human beings we inherit original sin from our biological parents going all the way back to the first sins committed by Adam and Eve. Since Mary was always meant to conceive Jesus in her womb she needed to be preserved from sin since Jesus would be her biological son. But even this was not enough to silence debate on this issue. St. Thomas Aquinas found it difficult to believe in the Immaculate Conception because he could not understand how Mary could be both free from sin a well as saved from sin, or redeemed, by her Son.

When the matter was settled, even though the Immaculate Conception was always believed by the vast majority of Catholics, it was because Duns Scotus, a philosopher, realized that Mary was preserved from all stain of sin at the first moment of her conception in her mother’s womb. In other words, the Immaculate Conception is the idea that the Holy Spirit, at the same moment that Mary came to exist in her mother’s womb, preserved Mary from incurring original sin. Furthermore, the Holy Spirit did this by merits achieved by the future suffering, death, and resurrection of Christ. Since the saving actions of Christ have an eternal element and transcend time it was possible for these merits to be applied to saving Mary as well, even though she was saved at the first moment of her conception before Jesus achieved his saving acts on the Cross and in his tomb.

Mary was saved from sin by being preserved from sin at the first moment of her existence while we are saved (God willing) from sin after we receive it from our biological parents. She was saved in this special way because she was to be the biological mother of the Son of God, Jesus.

I hope this helped, and I hope it will help people in your Bible Study as well!